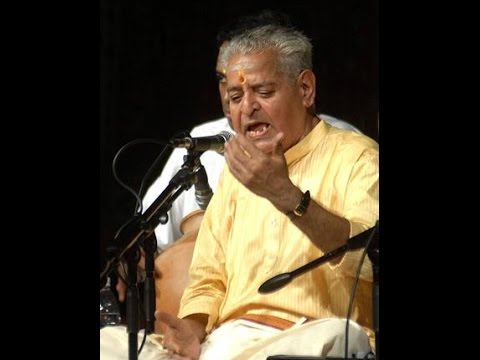 D. Pasupathy, born in Tiruvannamalai, came to Kalakshetra in Chennai when he was 14 and trained under stalwarts like Tiger Varadachariar, Budalur Krishnamurthy Sastrigal, T.K. Ramaswamy Iyengar, Mudikondan Venkatarama Iyer, and Mysore Vasudevachar. He acquired a Post-graduate diploma in music and started teaching at his alma mater, Kalakshetra. Later he served at Sri Venkateswara College of Music and Dance run by Tirumala Tirupati Devasthanam in Tirupati and retired as its principal.

He was back in Chennai and continued to teach at Kalakshetra. Pasupathi was also adept in playing the veena, Bharatanatyam and Nattuvangam. He is known for his unassuming nature.

Prof. Pasupathy composed the music for a dance production 'Tirukural Bharatham' for the Dhananjayans. He set tunes to many Annamacharya compositions and popularised them. He was a recipient of Sangita Kala Acharya award from The Music Academy, Madras and Sangeet Natak Akademi Award for his contribution to Carnatic vocal music.

Listen to Varashikhi vahana in Supradeepam composed by Thyagaraja rendered by D. Pasupathy