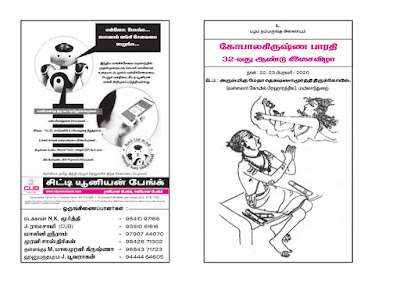 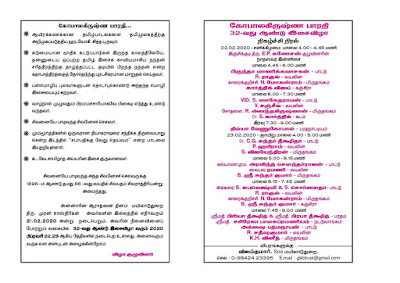 Gopalakrishna Bharathi was born at Narimanam, near Nagapattinam in the year 1810. He spent his early days in Mudikondan village, near Thiruvarur. He also served at the Sri Saraswathi Temple at Koothanur village. Later he moved to Anandathandavapuram, a village near Mayavaram (now Mayiladuthurai). He lived the remaining part of his life in the village.  Bharathi trained in Carnatic music under the veteran Ghanam Krishna Iyer and learnt Hindustani music from another exponent, Ramdas.

During the period when shiva-katha and hari-katha were popular, Bharathi chose the character Nandan who was born in a humble society and yearned to see Lord Siva at Chidambaram, to compose the musical 'Nandanar Charitram'. The discourse became popular and the then French Collector of Karaikkal, Seesay, who recognised the richness of the language, lyrics and bhakti in the songs, published this opera through his associates.

He dedicated his life to composing songs on Lord Siva and attained mukthi on a Sivaratri day in his 86th year. His aradhana is celebrated this year on Feb. 21, 2020 at a private event followed by a two-day music festival on Feb. 22 and 23, 2020 at Sri Medha Dakshinamurthy temple within the precinct of Vallalar temple Mayiladuthurai.

The festival will begin with Injikudi E.P. Ganesan's Nadaswaram on Feb. 22 at 4 p.m. followed by concerts of Brindha Mackavasakan, S. Saketharaman and Bharatanatyam by Divya Venugopal. On Feb. 23, concerts of Dr. C.G. Sundar Dikshitar, Kalyanapuram Aravind Soundararajan, Akkarai Sisters and Bharathanatyam by Priya Dixit and Prabha Dixit will be held.