Master violinist, composer and guru Lalgudi Jayaraman is celebrated across the music and dance world. His students, including his son G.J.R. Krishnan and Vijayalakshmi, have organised a tribute on Sep. 20, 2020, to celebrate his 90th birthday.

Born on Sep. 17, 1930, Lalgudi Jayaraman began performing in concerts as an accompanying artiste at the age of 12 and had played alongside many stalwarts. Later he took to performing solo. His Varnams and tillanas are sung and played by his students as well as by many artistes, who admire the versatility and the melody in the compositions.

To mark the 90th birthday of the maestro Lalgudi Trust (formed by Lalgudi Jayaraman in 1979 and now managed by his son Lalgudi G.J.R. Krishnan aster the demise of his father in 2013) is hosting a special tribute online. 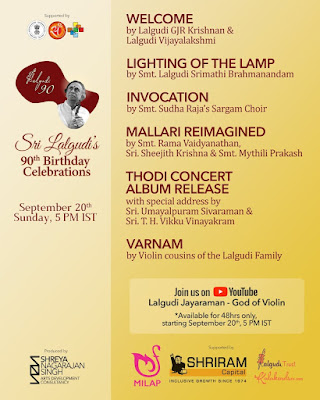 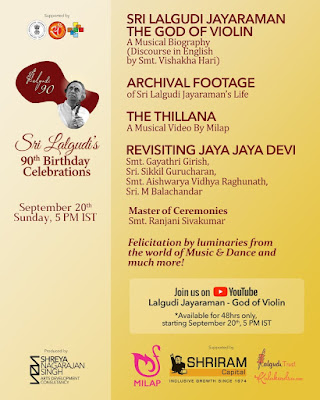 Click on the image to view in a larger size

Earlier, as part of these celebrations, his son and daughter had organised online workshops to teach his compositions. And tributes by his students are regularly uploaded on the YouTube Channel - https://www.youtube.com/channel/UCAyBTqLgRd62F04KKzRFCVw/videos

The tribute virtual event on Sep. 20, 2020, starts at 5.00 PM (17:00 Hrs IST). After the welcome address by the Lalgudi siblings, Lalgudi Srimathi Brahmanandam, younger sister of Lalgudi Jayaraman, who had played many duet concerts with her brother, lights the lamp. Invocation is by Dr. Sudha Raja's Sargam Choir.

The first in the line-up is 'Mallari reimagined' Three dancers Rama Vaidyanathan, Sheejith Krishna and Mythili Prakash come together to recreate, reimagine the grand Mallari composed by the maestro for the movie Sringaram directed by Sharada Ramanathan.

An album of the thematic concert that featured compositions in Thodi raga held in 1973, will be released followed by mridangam vidwan Umayalpuram Sivaraman and Ghatm 'Vikku' Vinayakram sharing their experience at the concert.

The Lalgudi sibling along with their cousin Anuradha Sridharwill present a varnam composed by Lalgudi Jayaraman. This presentation will have the mridangam accompaniment of Shriram Brahmanandam, another cousin and his son Arin Shriram.

A musical discourse in English - Sri Lalgudi Jayaraman - the God of Violin will be presented by Vishakha Hari, as a biography on her revered guru. 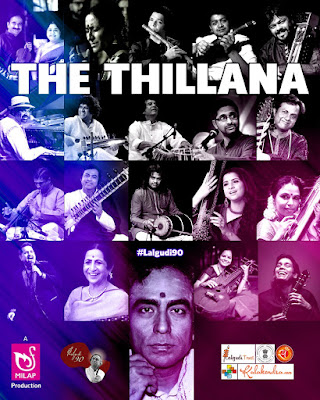 Bharatanatyam guru Rhada will speak about the production 'Jaya Jaya Devi' for which Lalgudi Jayaraman had composed music. Singers Sikkil Gurucharan, Gayathri Girish, Aishwarya Vidhya Raghunath with M. Balachander will render the mangalam of the production.

The master of ceremonies in Ranjani Sivakumar, Carnatic musician.

The event is supported by the Ministry of Culture, Government of India and the South Zone Cultural Centre, Thanjavur.